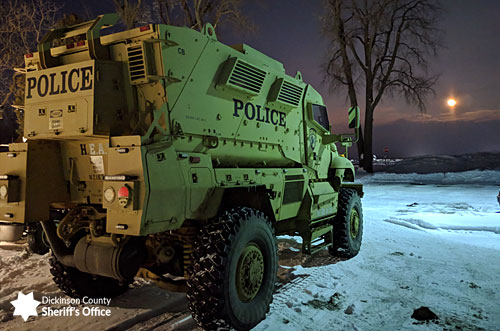 In an effort to assist departments with high-risk incidents, a regional emergency response team was formed in 1997. Called H.E.A.T., it stands for High risk Entry and Arrest Team and it exemplifies the very nature of the organization. The Dickinson County Sheriff's Office joined this team in 2009.

The team is available to all law enforcement agencies needing to resolve high risk situations for which regular officers may not be equipped. Some of these situations are, armed subjects barricaded inside a structure, execution of search warrants where there is the threat of firearms, and entry into structures where there may be large quantities of drugs or hazardous chemicals.

The team consists of hostage negotiators, snipers, an administrative liaison, dispatchers, a medic, specialists in less than lethal munitions, entry specialists and a team leader. All members on the team are expected to complete a basic training course offered by S.O.T.A., an organization that specializes in training SWAT officers. The officers must maintain a high level of physical agility, and twice yearly are required to pass an agility course. Training is a high priority, and the team meets once a month for at least eight hours to train as a group. Every H.E.A.T. team member is expected to qualify with his or her particular weapon at least four times per year. Some of the situations for which the team trains include, active school shooters, hostage negotiations, school bus ground assaults, riot control, and school searches.

Team members thank all the individuals and organizations whose support helps to make them one of the best trained teams in the area.